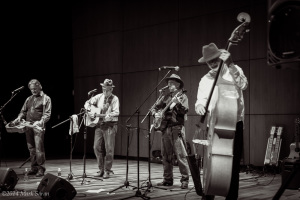 FarmStrong lights up the stage with exquisite harmony signing and seasoned instrumentation. The heart of the band draws on inspiration from the last century of country, blues and bluegrass music from the 1920’s through the 50’s, as well as folk, rock, gospel and soul music of the 50’s, 60’s, 70’s and beyond.

FarmStrong’s talented and experienced musicians take their audience outside the bluegrass tradition. Their unmistakable sound moves the soul, while remaining firmly rooted in music from the mountains.

Forever (2015)
The band’s latest release draws upon a wide range of more current roots music, including a few memorable original songs, and works by The Cars, Ry Cooder, Rodney Crowell, Kate Bush, as well as some old classics.

Live In Dungeness – The Summer Sessions (2013)
This live recording marks the beginning of FarmStrong, but it rings with a very distinctive sound that the band still embodies.

“At times reminiscent of early Seldom Scene or even The Country Gentlemen, the arrangements mine the bluer, sparser side of bluegrass that is too often passed over by younger, unweathered bands fixated on speed and pyrotechnics. Jim Faddis and Cort Armstrong are both strong, emotional singers, but together they establish a natural, brother-like chemistry… With a great blend of spine-tingling vocals, seasoned performers and strong material, this is a band to watch!”
– Kevin Brown, DJ for the Spokane Public Radio show Front Porch Bluegrass